I have been practicing yoga regularly for around 3 years now but have really stepped it up a notch this last year. I started because I was doing a lot of distance running and wanted an effective way to build some strength and to stretch out, I always knew there was more to it than just poses and while I enjoyed savasana at the end of class I wasn’t that interested in anything other than fitness. Last summer I decided to take a British Wheel of Yoga foundation course to help me get more out of my classes and it really opened my eyes to the world of yoga and made me realise quite how the different elements are linked!

I  finished my course at the beginning of this month having loved every second of it, however, I felt like I’d learnt so much that I didn’t know where to start incorporating it into my every day life and practice. It was fine during the course as I had someone to direct me and give me homework each month but suddenly I found it was up to me!

To be honest I was feeling very overwhelmed by it all, feeling like I was doing everything wrong and had so many elements  to a complete yoga practice and techniques I’d learnt, which I should be incorporating into an everyday practice, but felt like it would take years of research before I could even get started! I took the foundation course to progress and it felt like I had gone backwards. Most of my yoga is done in classes and I was finding that whenever I came to do a personal practice at home I would manage a few sun salutations but everything else just felt clumsy. Pranayama without a teacher was impossible to me!

Then I got a bug and couldn’t even go to class!!

While I was lying in bed moping about being ill (yes I know it’s not very yogi) I started looking for something to read to keep me busy. I was about to pick up the first Game of Thrones book, which I’ve been putting off until the end of the current TV series, then I saw ‘Yoga Girl’ by Rachel Brathen who I’ve been following on Instagram for a fairly long time now. I didn’t stop reading until I’d finished!

It suddenly struck me how simple it can be!

I followed her advise and tried 5 minutes breath awareness first thing after getting up in the morning… It was quite seriously unsuccessful. I didn’t give up and the following day I tried a few sun salutations first to connect my breath and felt a lot more focused.

I’m not going to lie, I’ve been going for a few weeks now and I’m still on 5 minutes and I’m yet to be able to focus for the whole time but I do feel like I’m getting somewhere and I know that it’s a skill which needs practising.

I am so pleased to have made a step towards a personal practice, even if it is a baby step! I now realise that actually having an interest in developing my knowledge and experience in yoga is enough for now. I’m not going to drive myself crazy with trying to do what ‘I’m supposed to do’ or try to do everything at once. I’m going to take baby steps and pick up a book because it interests me not because I think it contains my next step!

I plan to continue journaling my my progress on here so I can see how far I get from this point and I would also love to share/swap stories, ideas and knowledge with others. 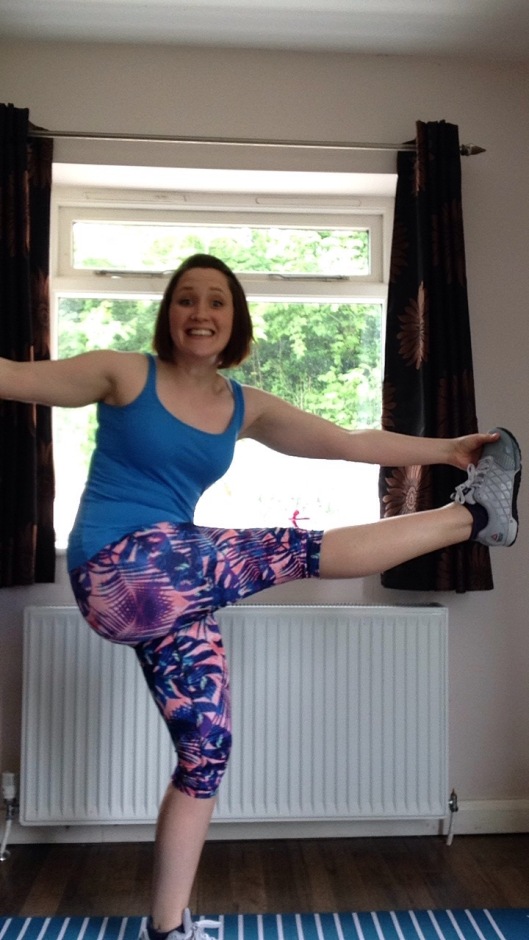 The idea behind this journal is that, because I’ve been having a bad year (nothing too bad), I thought it would be good to create something to highlight all the good bits. So September was the first month I did this and I’m hoping to keep it up for a year, I’ve been creating a page or two per month by sticking in pictures, stickers, tickets, newspaper clippings etc to sum the month up. It means that if I’m having a bad day I can flick through it and see that I’ve actually done some pretty cool stuff.
I’m also having quite a Lot of fun putting it together and decorating the pages. My plan is to base the decoration on key features of the month I’m doing, so september’s theme was ‘Indian summer’ for obvious reasons. I just used colours from the theme this month but other months will be more themed.
I’m really pleased with how it’s come out so far, it may not be the most professional or neat of books but I think it looks really fun which was the idea.

On the first two pages I used ripped up bits of coloured paper to create the background which was serious fun and took me back to preschool days. I also stuck some sun stickers on. I just used stamps to create the month label this month. 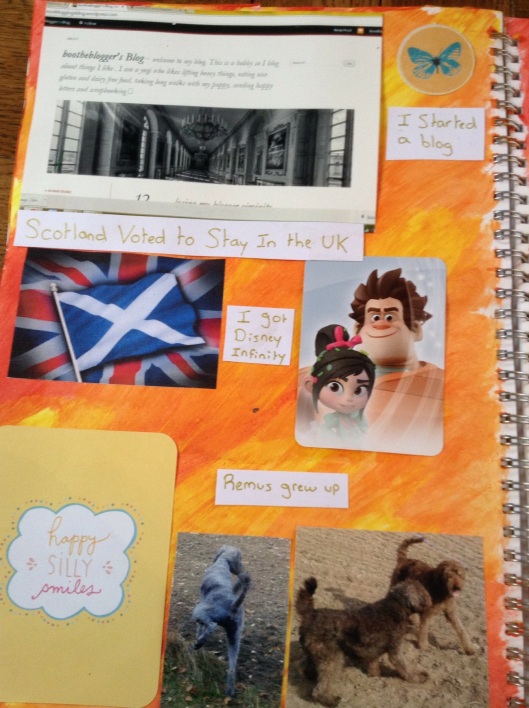 I tried to work it so that there was a page for each week which worked quite well this time, I used things which happened all month or things which didn’t have a specific date to fill in the emptier pages so that things were spread a bit more evenly. I know this won’t work for October though as everything I’ve got planned is at the end of the month.
I’m really looking forward to putting the October pages together and have already started on some of the background.

I will post pictures of October when it is finished which is likely to be the beginning of November depending on my work rota, until then I have some posts to put up about my other scrapbook I’m working on at the moment and some of my other hobbies.

Thanks for stopping by

I thought I would write something about what I eat, or don’t eat as the case may be. I was going to post about my progress in yoga since starting a bwy foundation course but I have had one too many snide comments about my IBS this week which, believe it or not, is quite upsetting. So here is the story of my IBS so far and why I find the general reactions to IBS upsetting.

IBS is one of the conditions which, in my experience, people just roll their eyes at before saying their wife’s, cousin’s, step dad’s neighbour has it and it’s just a bit of a tummy ache that you can take pills for. The point is that there are many different forms and severities of IBS and we aren’t all lucky enough to be able to control it with medication alone.

I discovered I had IBS after becoming unwell at the beginning of my second year at university (3 years ago). I had awful stomach cramps, passed out several times a day, felt continually sick, picked up every cold and flu bug going, lost a lot of weight and all my energy and motivation was completely gone.

After to-ing and fro-ing from various doctors and specialists for a year of being told that no one had any idea what was causing my problems I read an article on-line about the symptoms of IBS which sounded a little familiar. I decided to take matters into my own hands and do a bit more research which led to cutting wheat and gluten from my diet and within a month I had my energy back, I wasn’t passing out so much and had gained some weight. (At this point my doctor had completely given up on me and essentially told me there was no point checking in with him and I should just get on with it.) Since then I have also cut out dairy, caffeine, alcohol, artificial sugar, eggs and I limit soya, veg and fatty food. There are also a number of individual food items which I have discovered set off my IBS (avocado is a particularly bad one) and I have had to stop running. I would like to point out that this is not an easy thing to do, I’m not doing it as a fad diet or because I am looking for attention. It has a huge effect on my life and my social life and I am doing it because it is the only way I have found to keep myself in good health.

I still have stomach ache most days and often feel slightly sick as well as having to have two sets of clothes for everything so I have clothes which fit me on ‘bloated days’ but I am so much better having changed my diet. There are bad days where for no explainable reason I revert back to how I was on day one and have to just sit it out.

Now for the rant…

I realise there are people a lot worse off (funnily enough you telling me this does not cure me) and I try not draw attention to it when I am eating something different to everyone else (I actually hate having to spend whole meals out and work lunches explaining to some poor interested soul ‘the story’ of why I eat what I eat). I also think that given how difficult it is to stick to such a restricted diet it should not be surprising that it is upsetting to have people sat eating their sandwiches and cake watching me eat my rice cakes and telling me that my food choices are faddy and stupid.

It really annoys me that IBS is not taken seriously given the effects in can have and I am still surprised by the lack of knowledge and the attitude towards IBS which I have found in most healthcare professionals that I have visited in relation to it and I would strongly urge anyone who is currently trying to find help with IBS type symptoms to take things into your own hands (within reason of course).

I am sorry this has been ranty and I am also sorry for the lack of pictures but I have no pictures of myself from when I was ill and am nowhere near creative enough to take pictures of my food. I would love to hear how other peoples experiences with IBS match up with mine.

thank you for stopping by 🙂

So I thought I would use my first ever blog to introduce myself.

My name is boo (more formally Beth) I am 23, finished my undergraduate course in linguistics a year ago and have been working as a carer for little children with complex needs ever since. My plan is to go back to university and train to be a speech and language therapist.

In the mean time I keep myself busy by going to the gym, doing yoga, sending letters to my lovely pen pals, scrapbooking and generally getting out and about as much as possible. I also have a one year old labradoodle called Remus who is sure to make an appearance on here.

This is a weekly blog where I can document my adventures and learnings and upload some of the photos I take of my life .

I shall leave it at that. From now on I vow to blog every weekend 💕

Have a lovely week